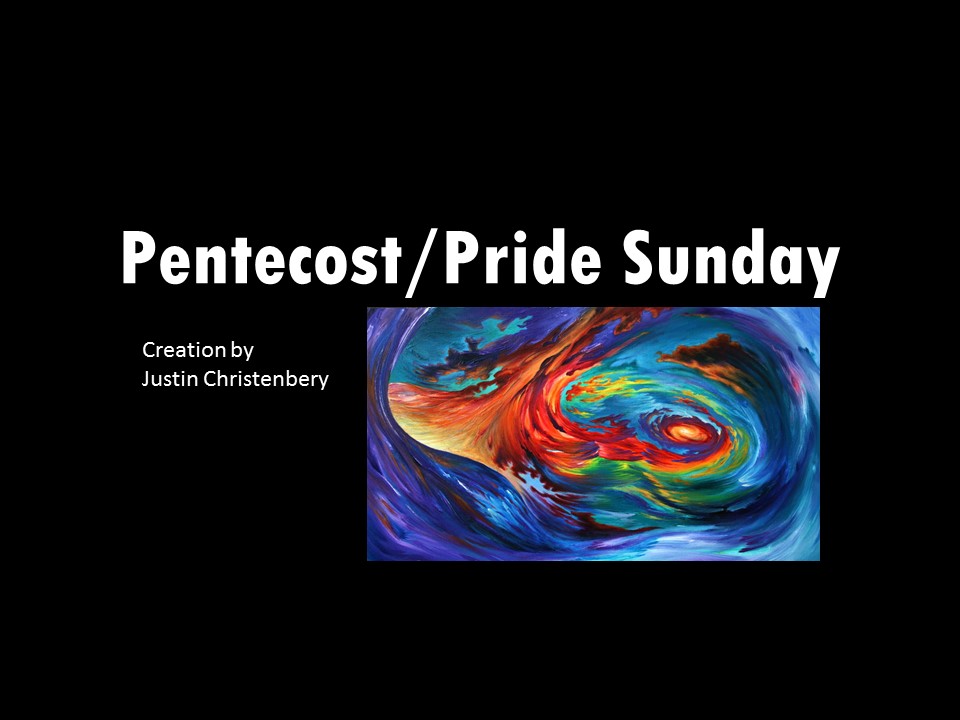 This really is not your typical Sunday service. I know that it might seem a bit confusing as to why we had communion before the meditation, but I think that for me, it makes a statement that is important today in a number of ways. This is Pentecost Sunday, the beginning of the church and as such it might be important for us to consider and remember the hospitality of the Table to which we were just invited. Not only that, it is also Pride Sunday and the idea of everyone, all fo us, being included, as we state every time we have communion, is also something that is important for us to keep in mind today and so we shared a common meal, in remembrance of Love Incarnate, we also remember the love of God for each and every one of us.

Now as I move into a deeper meditation, I would like to begin by doing something that I have not done before. I would like to start with a bit of a meditation that was offered by a minister of a Unitarian Church around Pride. What I will hope to do then is to bring this into conversation with our readings this morning.

Most of us have felt the power of shame in our lives. Shame and violence are the two most powerful tools of social control that exist in human communities. They are used to keep us all in line, to keep us quiet, to batter our self-esteem and defeat our sense of strength. Usually, shame comes first and usually it is enough to keep us in line. Little boys who are sensitive, tender-hearted, and creative are usually the first to feel the powerful effects of shaming. It may begin subtly, but very quickly boys -all boys – learn that if they cry or laugh too much, or if they prefer nurturing play to competition, or if they are more compassionate than tough -they will feel the power and pain of shame.

Girls, of course, feel it too -though there is a bit more room in our society for the tomboy. Still, if a girl doesn’t care about how she looks, or if she wants to rebuild an engine instead of becoming a cheerleader, or if she prefers robots or fishing to Disney princesses -she too will quickly learn the power and pain of shame.

And let’s not forget the kids who don’t fit the gender dichotomy at all. They ones who can’t jam themselves neatly into a gender box -they feel the power and pain of shame every day, and sadly, most often their parents are counseled, even urged, to be the first to shame their kids into gender conformity.

Shame is everywhere if you are gay. Walking down the street every day, I hear kids say to one another, “That is so gay.” They don’t mean happy. They mean “stupid” or “unattractive” or “embarrassing” or “unacceptable.” In popular culture, “That’s so gay” has been and in some ways still is the ultimate insult. But shame is not always that blatant. As we get older, we tend to be a little more subtle. So my adult friends don’t say, “That’s so gay.”

Instead, they wonder why gay people have to so obvious -so “in your face” -about being gay. They wonder why we can’t just be quiet about it. I mean, why do we need a parade and t-shirts and to talk about our lives and experience all the time?

That is why I know we can all learn something important from Gay Pride: because shame is not reserved in our culture for people who are gay. Shame is let loose on every one of us any time we are a little bit “queer” –any time we stop hiding the fact that we’re different in some way from the norms that surround us. The message of shame is always “you’d better not let anyone know.” Shame cuts a person off from some part of themselves. Shame convinces us that we have to hide and hold back and never let anyone know that we aren’t just like the Joneses and everyone else. And that hiding and holding back -and especially the deep sense of inadequacy that grows from them -damages the human spirit.

I’m going to say that again, because I think it is vitally important. Shame damages the human spirit. It attacks people at the deepest part of their being and convinces them that they are not worthy, not important, not good enough, not acceptable as they are.

And in the case of the church, that they are not lovable, worthy of love of another, and worthy of the love of God.

We heard in our reading from the Book of Acts the story of Pentecost. How the Spirit descended on those who were together and they began to speak in different tongues, different languages. This is something that had not been seen before. At this time in Jerusalem there were people from all over the known world. These people had come together to celebrate and many of them could not communicate with those around them, they did not speak the same languages. So all of a sudden this group of individuals is speaking in such a way that they could be understood. But when this happened instead of being shocked, surprised, and delighted, the response was quite different. Those who heard these individuals speaking were accusing them of being drunk, early in the morning. In one way those who accused them of drunkenness were trying really hard to shame those speaking in those different languages, shaming them to stop what they were doing. They were attempting to shame those who were gathered together because they were doing something that was not quite the norm, because of something that was not understood, something that was different. Isn’t that the way it goes. It seems as if it has always been easy to shame those who are different. It has always been easy to get into the habit of dividing us into “us” and “them” and of course being one of “them” is something to be ashamed of in the world.

What happens next is rather interesting. You see instead of just slinking away, Peter responds to those who are trying to shame them. The reading this morning actually says that Peter spoke with “bold urgency.” What would bold urgency mean? Could it be mean that Peter spoke with force, with passion, with strength of conviction? But if you notice there is one thing that Peter does not do to those who appear to be trying to shame them, he does not turn that shame around on those who are shaming him. Rather Peter approaches this conversation, as a conversation about the Spirit, that which has filled them with more than they imagined and challenges them to allow themselves to be filled with the Spirit.

Now I understand that I am going to make a bit of a leap here, and I hope that you will give me the grace to make this leap and follow along with me as I do this.

This is where I see that the reading from 1Corinthians intersects with our reading from Acts and also with the reflection that I read at the beginning.

You see what is this Spirit that has been poured out on those who were meeting in Jerusalem? It is that which will allow them to truly connect with those around them, by speaking in a way in which they will be heard. If we look to 1Corinthians we hear from the NRSV translation, “If I speak in the tongues of mortals and of angels, but do not have love, I am a noisy gong or a clanging cymbal. 2 And if I have prophetic powers, and understand all mysteries and all knowledge, and if I have all faith, so as to remove mountains, but do not have love, I am nothing. 3 If I give away all my possessions, and if I hand over my body so that I may boast,[a] but do not have love, I gain nothing.” To speak to be heard is to speak in Love. To be filled with the Spirit so that one speaks to be heard, and is not just that clanging cymbal, is to speak with Love.

This is also Pride Sunday and I think that this understanding of coming from a place of love is important for us to understand on a day such as today. As the reflection at the beginning shows us for too many years members of the LGBTTQ community have been shamed by people of faith, we have not historically spoken from a place of love to this community. Maybe it is time that we reclaimed our heritage of love. Our story from Acts this morning does not say that Peter and his friends only spoke to those who were the same as them, but rather to all who were present in Jerusalem at that time. We as Christians are challenged to do the same thing. We are not called as people of faith to only love those who look like we do, who dress like we do, who love the same way that we do, rather we are called to love all, and in loving all we become conduits for that Spirit of Love.

So, will you be a conduit for God’s love today, letting everyone, on this Pride Sunday, know that they are loved by God as they truly are?

Link to the music for this Sunday: