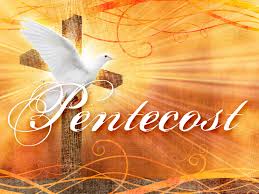 Pentecost commemorates the descent of the Holy Spirit upon the twelve apostles and other followers of Jesus as described in the Acts of the Apostles 2:1-31. For this reason, Pentecost is sometimes described as the “Birthday of the Church.”  Pentecost is celebrated seven weeks (50 days) after Easter Sunday.

“Holy Spirit, Hear Us” (VU #377) – This hymn, with words by William H. Parker and music by James Frederick Swift,  was first published in The School Hymnal (1880) by the General Baptist Association in England.

Holy Spirit! hear us; help us while we sing; breathe into the music of the praise we bring.

Holy Spirit! shine now on the book we read; light its holy pages with the truth we need.

Holy Spirit! prompt us when we bow to pray; speak within and teach us what we ought to say.

Holy Spirit! help us daily by your might, What is wrong to conquer and to choose the right.

Parker also wrote the words for the hymn “Tell Me the Stories of Jesus.”

This is one of the most long-lasting and widely used choruses in Christian worship. Every aspect of the song embodies a simple sincerity.   The melody encompasses only five notes.  The harmonies can be played by a very modestly skilled pianist, and three of the four lines repeat the same nine words.  Yet for many, the straightforward petitions of this song draw the singer into an attitude of prayer.
The late hymnologist William J. Reynolds provided background on the song’s creation:
“During January and February of 1926, the George T. Stephans Evangelistic Party conducted a citywide revival in the tabernacle in Orlando, Fla.  Daniel Iverson, a Presbyterian minister from Lumberton, N.C., spent several days in Orlando visiting with the Stephans team.  The day he arrived, he was greatly impressed by a message on the Holy Spirit given by Dr. Barron, a physician from Columbia, S.C.
“Later that day Iverson went to the First Presbyterian Church in Orlando, sat down at the piano, and wrote this song. Miss Birdie Loes, the pianist for the Stephans team, wrote it out on manuscript paper. E. Powell Lee, the team song leader, was immediately impressed and taught it to the people that evening in the tabernacle, and used it throughout the campaign.”
Daniel Iverson (1890-1977) was a native of Brunswick, Ga.  As a Presbyterian minister, Iverson served churches in Georgia, South Carolina and North Carolina.  In 1927 he organized the Shenandoah Presbyterian Church in Miami, Fla., remaining with this congregation until his retirement in 1951…source: The United Methodist Reporter, Dr. Hawn – professor of sacred music at Perkins School of Theology, SMU.

The second verse of the hymn was written by Michael Baughen for Hymns for Today’s Church (1982).  The arrangement in Voices United is the one written by Darryl Nixon for Songs for a Gospel People (1987).

“This is God’s Wondrous World” (VU #296) – This song is often recognized as the old CGIT (Christian Girls in Training) hymn, slightly altered for inclusiveness.    It has helped shaped the creation spirituality of many people.   The text is adapted from a poem published in a collection of Maltbie Davenport Babcock’s work entitled Thoughts for Everyday Living (1901).  The origin of the tune is unknown.  It was adapted to the hymn text by Stanley Oliver, organist at St. James United in Montreal,  in 1929 and the hymn was published in Songs of Worship (1930) and The Hymnary (1930).

“May We Rise” – “May We Rise” is one of the songs selected by a Canadian ecumenical committee and the World Council of Churches to be part of the worship material for next year’s Week of Prayer for Christian Unity and was featured in this year’s Band Blast in Saskatoon. The song was written by Pat Mayberry and John Wesley Oldham and has been arranged for piano by David Kai. 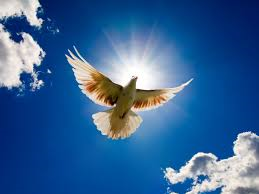 “She comes sailing on the wind, her wings flashing in the sun; on a journey just begun, she flies on. And in the passage of her flight, her song rings throughout the night, full of laughter, full of light, she flies on.”

Both the text and tune are by Gordon Light of the Common Cup Company, a group originally formed in Winnipeg and subsequently based in Burnaby,  BC.  “She Comes Sailing on the Wind” was written in the early days of Common Cup and is perhaps the most famous of Gordon Light’s songs worldwide.  Jim Uhrich captured the essence of the song: “The Spirit of God is in flight too—and the rustle of her passing wings may turn our human fleeing into flying!”
The song blazed new theological territory for the composer: Gordon Light says this song “was conceived as a sort of ‘history of work the Spirit’—from the work as Life Giver of creation to the work of inspiring prophetic [ministry] to Her presence in the moments of the birth and baptism of Jesus to Pentecost to now (‘down the ages still she flies on.’).”
The composer continues: “To write and sing ‘She Flies On!’ pushed me to say it was OK to use feminine imagery for God. After that, I didn’t feel uncomfortable . . . It’s allowed me to go further in my own faith than I’ve gone before.”
Drawing on biblical passages from Genesis through the Gospels, stanza one uses the simile of “a mother breathing life into her child” to describe the movement of the Spirit upon the earth at creation.
The Spirit was with Mary as she “sang the Spirit song within her heart” in stanza three. In stanza four “She swept down from the sky” during the baptism of Jesus. In stanza five, the Spirit continues to fly on with “her wings unfurled.”
“She Flies On” first appeared in Songs for a Gospel People (1987), the supplement to The Hymn Book (1971), a joint hymnal for the United Church of Canada and the Anglican Church.  According to Ian Macdonald, the song’s success was quite a surprise to the group: “We did a [first] concert in 1987 in Kamloops. And that wound up getting ‘She Flies On!’ into the green book [Songs for a Gospel People], and that really surprised us. Gord had already given up on the song. We did it that once, and that was the time Ralph Milton [publisher for Songs for a Gospel People] was in the audience. He came running up on stage to get it. He grabbed the sheet right off Gordon’s stand.”
Since that time, “She Flies On” has been sung around the world in many languages.  Source:  The United Methodist Reporter.

“Send Us Out” – Our benediction response for the next few weeks will be “Send Us Out” written by Ruth Fazal in 1993.  As a worship leader and singer/songwriter, Ruth has travelled extensively across North America, Europe, and Israel.  Ruth honours and loves the prophetic, and feels an urgency in this hour, for us to be awakened to the purposes of God.

“Listening for His voice is the most important thing for us to be doing. I believe that there is a realm that the Lord wants to bring us into, in which we will begin to see with a ‘Kingdom of God’ perspective as Jesus taught. I feel sure that it is on God’s heart to bring us there, and in that place, for us to come to a greater understanding of who He is, and of who we are in Him. It is time for the Church to be functioning as real citizens of the Kingdom of Heaven. This is what I am giving my heart to! I want to learn how to live that way.”