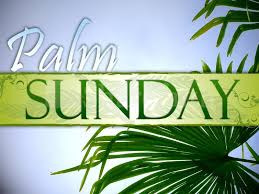 “Lift up the gates eternal, lift up your voices:
For God in glory comes, the nation rejoices.

See, all the earth is God’s, its people and nations:
God built it on the deeps and laid its foundations.

Who is this glorious one, for whom we are waiting?
We wait the mighty One, our God celebrating.”

This paraphrase of Psalm 24 was written by Arlo D. Duba in 1986.  Duba was a chaplain, professor of religious studies and an administrator, first at Westminster Choir College and then at Princeton Theological Seminary, before going to the University of Dubuque Theological Seminary as dean.   The refrain is by Reverend Willard Jabusch, a leader among the post-Vatican II hymn writers for the Roman Catholic Church in the United States.  The tune is an Israeli folk melody, arranged by John Ferguson, a professor of organ and church music at St. Olaf’s College in Minnesota.

Ride through the city today.
Ride through Jerusalem, little donkey,
Palms spread along the way.

You bear a dear and precious load,
Making your way down a crowded road.
Ride through Jerusalem, little donkey,
Ride through the city today.

You bear the son of God, you see.
He’ll bear a cross for you and me.
Sing hosanna. Blessed is he who comes in the name of the Lord.”

This week’s Joyful Noise anthem is by Michael Bedford.  It was written in 2009.

“One, two, three, alleluia,
Praise to you O God!

He came riding on a donkey into Jerusalem.
Praise to you O God!

Take the branches, wave them gently.  Lay them down now.
Praise to you, O God!

This week, the children in Bible Adventures will be singing the song “One, Two, Three, Alleluia” by Mary Lu Walker, with Palm Sunday words by Gloria Saindon and Eleanor Lwiwski.

“Hosanna, loud hosanna the happy children sang;
Through pillared court and temple the joyful anthem rang;
To Jesus, who had blessed them close folded to his breast,
The children sang their praises, the simplest and the best.

From Olivet they followed ‘mid an exultant crowd,
The victory palm-branch waving, and singing clear and loud;
The Lord of earth and heaven rode on in lowly state,
Content that little children should on his bidding wait.

“Hosanna in the highest!” That ancient song we sing,
For Christ is our Redeemer; earth, let your anthems ring.
O may we ever praise him with heart and life and voice,
And in his humble presence eternally rejoice!”

The text for this hymn is based on Christ’s triumphal entry on Palm Sunday and the children’s role in that event. The text was written by Jeannette Threlfall (b. Blackburn, Lancashire, England, 1821; d. Westminster, London, 1880) in an “idle moment” (as she says she wrote all of her hymns, all others of which have been forgotten). Undoubtedly, Threlfall had Mark 11 in mind when she wrote this text, but she also alludes to Jesus’ welcoming of the children in Mark 10:13-16. Stanzas 1 and 2 tell how the children shared in the songs during Christ’s procession into Jerusalem. Stanza 3 is our cue to participate in praising our Redeemer.

Threlfall’s life was extremely difficult: she was orphaned at an early age, and two serious accidents caused her to be an invalid for life. But she bore her misfortune with grace and fortitude and maintained a ministry to many people who came in contact with her. Threlfall wrote devotional verse, which was published anonymously in various periodicals and later collected in Woodsorrel, or Leaves from a Retired Home (1856) and Sunshine and Shadow (1873), which included “Hosanna, Loud Hosanna.”

The melody, ELLACOMBE, is a Roman Catholic tune from late 18th-century Germany, which was first published in 1874.

“Now to the Lord, the noble King, with all our hearts and voices sing,
“All praise to His eternal name.”
Let songs in boundless joy proclaim:

In Jesus Christ, the Lord of all, our hearts in gratitude recall the joy of finding Christ the King,
With voices strong we thankfully sing:
That Jesus is King!”

This week’s anthem was written by Lloyd Larson (1984).

“Like a rock, like a rock, God is under our feet.
Like the starry night sky God is over our head.
Like the sun on the horizon God is ever before.
Like the river runs to ocean, our home is in God evermore.”