Good Friday – So many questions…does anyone listen to the answers?

What is Good Friday?

Good Friday commemorates the crucifixion of Jesus. It is the most solemn day in the Christian calendar and is the pinnacle of Holy Week.  It falls on the last Friday before Easter.   As early as the first century, the Church set aside every Friday as a special day of prayer and fasting. It was not until the fourth century, however, that the Church began observing the Friday before Easter as the day associated with the crucifixion of Christ. First called Holy or Great Friday by the Greek Church, the name “Good Friday” was adopted by the Roman Church around the sixth or seventh century.   There are two possible origins for the name “Good Friday”. The first may have come from the Gallican Church in Gaul (modern-day France and Germany). The name “Gute Freitag” is Germanic in origin and literally means “good” or “holy” Friday. The second possibility is a variation on the name “God’s Friday,” where the word “good” was used to replace the word “God,” which was often viewed as too holy to be spoken aloud.  Good Friday rituals and traditions add to Good Friday’s significance. The ceremony is somber, with officiants often dressing in black vestments. The pulpit and the altar are bare; no candles are lit. The purpose behind the solemn presentation is to create an awareness of grief over the sacrifice of God’s only begotten Son.  To many Christians, Good Friday is a day of sorrow mingled with joy. It is a time to grieve over the sin of man and to meditate and rejoice upon God’s love in giving His only Son for the redemption of sin.

Today’s music of select verses of hymns and anthems will supplement the story as told through the readings.

“We Remember” – The opening anthem draws us into the Good Friday story by retelling some of the events of Jesus’ ministry and leading us to the phrase “we remember Calvary.”  It incorporates the traditional hymn “When I Survey The Wondrous Cross”  by Isaac Watts.   Watts was deeply disappointed with the hymns of his day, which failed to inspire his parishioners to genuine worship and holy living. His dissatisfaction led him to compose more than six hundred hymns, all designed to call his congregation to a deeper knowledge and worship of God. The hymn “When I Survey the Wondrous Cross”  was written in 1707 for use in a Communion service.

“Tis Midnight” – Hymn writer William Bingham Tappan was trained first as a clockmaker. Later, he was licensed to preach by the Congregational denomination. He had a fruitful evangelistic ministry in America. Tappan also took special interest in the work of the Sunday School, and had a lifelong association with the American Sunday School Union. He published ten books of poetry, and a number of his poems were turned into hymns. William Tappen died of cholera in 1849, at the age of 55.  The hymn of his in widest use today is ‘Tis Midnight and on Olives Brow,” a stirring picture of Christ in Gethsemane.

“When We are Tempted to Deny Your Son” (VU #119) – This hymn draws us into the story of the disciple Peter, who denies Jesus.   Through it we implore that “when we are tempted” that God’s will is done.  This hymn was first published in an American Presbyterian hymnal and service book known as The Worshipbook (1972).

“Beneath the Cross of Jesus” – This hymn of commitment was written by a frail Scottish Presbyterian woman of the 19th Century, Elizabeth Clephane, who, despite her physical limitations, was known throughout her community of Melrose, Scotland, for her helpful, cheery nature. Among the sick and dying in her area she won the name of ‘Sunbeam’. ‘Beneath the Cross of Jesus’ was written by Miss Clephane in 1868, one year before her early death at the age of 39. She wrote eight hymns, all published posthumously. Besides this hymn, only one other has endured–‘The Ninety and Nine’, made popular by the tune composed for it by Ira D. Sankey.

“Go to Dark Gethsemane” (VU #133) – James Montgomery, born of Moravian missionary parents, was a newspaper editor in England who, risking imprisionment, published articiles advocating human rights and the abolition of slavery.  He wrote more than 400 hymns.

“”When the Son of God Was Dying” (VU 153)    – We will be singing the second verse of this hymn which was written by John L. Bell with the Wild Goose Worship Group for the Iona Community in Scotland in 1988.  The second verse (“Crowds which once had cried “Hosanna!” lost their voice”) references the contradictory nature of the crowd which cries “Hosanna!” on Palm Sunday and then either stands by silently or cries “Crucify Him” on Good Friday.

“Three Empty Crosses” – This song, by David Lantz III speaks about the three crosses on the hill.  “Each one meant death, but one meant victory, the cross that was meant for you and me.”

“O Come and Mourn” –  F.W. Faber’s hymn for Good Friday originally had twelve verses.  Today we will only be using the first and fifth verses.    This hymn appeared in The Hymnary with 6 verses, The Hymn Book with 5 verses, and Voices United with 4 verses.  In all three United Church of Canada hymn books, Faber’s text is set to John B. Dykes’ ST CROSS, composed for the text and published in the first edition of Hymns Ancient and Modern (1861).

“Who Knew” – The lyrics of this contemporary pop song by P!nk could easily be seen to express the feelings of someone who knew Jesus well. 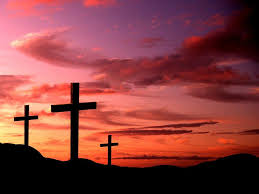